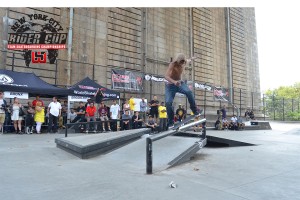 Over the past 5 weeks, over 20 teams from the 5 boroughs went head to head in the Rider Cup NYC Qualifiers in order to get to the finals.  It came down to the top 12 teams who skated their hearts and souls out, as there could only be one winner who would go home with the $10K cash and the all expenses paid trip to South Africa to compete in the Rider Cup World Championships at Kimberly Diamond Cup this October.

Only 12 points separated the final 2 teams, Soul Team from Brooklyn, and LES Bomb Squad 1 from Manhattan, from going home with $10,000 and an all expenses paid trip to South Africa. In the end, it was Soul Team that came out on top!

Huge thanks to presenting sponsors World Skateboarding Grand Prix and Volcom for making it possible! Thanks also to our shop partners: Labor, Vault, Heavenbound 7, Belief, KCDC and CD Skateshop.  Thanks to our non profit partner the Harold Hunter foundation, our media partner NY Skateboarding, and the Sticks and Stones Productions crew for putting on 6 great events. Special thanks goes out to everyone that made it out from the Northern Cape Provincial Government from South Africa for their support and presence at the event!

We can’t wait to see Soul Team compete in South Africa for the Rider Cup World Championships at the Kimberly Diamond Cup and hope to see all the teams back next year!  Thanks to all the skaters, spectators and people that supported and made it possible!