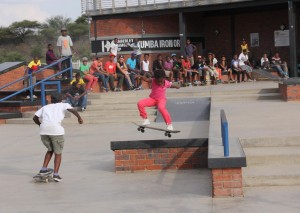 The last weekend of March Chinner and the crew held some more skateboarding events for all the locals at the Kumba Skate Plaza. The highlight of the weekend was definitely Saturday night’s “Bust Yo Self Down the Big 4″ jam session. We had a deck, trucks, and wheels on the line for the top 3 tricks, so the kids were going all out. The illustrious “Big 4″ can be quite a dangerous obstacle, so, luckily, no one got busted too hard. Brad Balie came through with a first try kickflip down the stairs, and eventually over the rail within a few tries, landing him first place and the deck. Honorable mention goes to Will Meleng for his several tre flip attempts. Will stomped a few but sadly couldn’t roll away before his knees forced him to call it quits. Shout outs and props are due to Moustache for his backside 50/50 and Samkelo Rashole’s noseslide down the hubba ledge, earning them 2nd and 3rd, respectively.

We’ve got all the results along with some photos to back up all the action that went down at the Kumba Skate Plaza this weekend. Scroll down to see what Kimberley was up to last weekend!

Bust Yo Self Down The Big 4
1. Brad Balie (Kickflip over the rail)
2. Tshego Afrika (BS 50/50 down hubba)
3. Samkelo Rashole (Noseslide down hubba)